Does Anyone Know about the Massacre of 19 Jews in Tiberias in 1938? 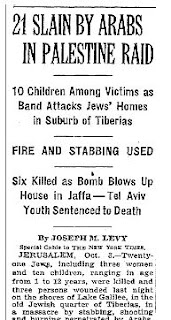 But missing from many of the martyrs' lists and the Israeli public consciousness is the massacre of 19 Jews of Tiberias on October 2, 1938, in the height of the "Arab Revolt in Palestine."  An organized force of Arab militiamen attacked the neighborhood from several directions.

Why is the account missing? Perhaps because of the absolute failure of British authorities and Orde Wingate's (Jewish) Special Night Squads to protect the Tiberias community. The Mandate was aflame, but virtually no one was guarding the 6,000 Jews of Tiberias.  Just three weeks later, an Arab assassin gunned down the Jewish mayor of Tiberias, Zaki Alchadeff, in broad day light.
﻿
﻿
A lengthy annual report of the British Mandate, 1938, included these three sentences:

"On October 2nd there occurred a general raid on the Jewish quarter of Tiberias. It was systematically organized and savagely executed. Of the 19 Jews killed, including women and children, all save four were stabbed to death."

Receive a Daily Picture by subscribing in the right sidebar and clicking "submit."  Click on the photos to enlarge. Click on the captions to see the originals.

The photographers from the American Colony photography department visited Hebron soon after the massacre in 1929 and produced the photos published here more than 80 years later.

It is quite possible that the photographers traveled to Tiberias after the massacre.  A series of pictures were taken at the Scots Mission Hospital in Tiberias, but the photos are dated as "between 1934 and 1939."  One picture shows "a little Jewish boy."  Another picture shows two British soldiers.  Other pictures show unidentified patients.

Is it possible that these were survivors of the October 1938 attack?﻿
﻿﻿

﻿ ﻿Other hospital pictures can be viewed here, here and here.

Read the words of The Last Survivor of the 1938 Tiberias Massacre.
Read Ha'aretz' account from October 3, 1938.
Posted by Our Mission at 6:06 PM