﻿﻿ The poems of Chaim Nachman Bialik (1873-1934) are still memorized in Israel.  His poem In the City of Slaughter about the 1903 Kishinev pogrom was as much an indictment of Jewish passivity as it was a condemnation of the perpetrators of the massacre.  The poem stirred Jewish and Zionist activists to establish self-defense groups such as the Haganah.﻿ ﻿﻿ 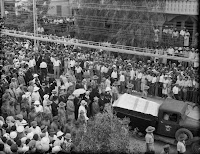 Streets and schools are named for Bialik throughout Israel.  His reputation as one of the great modern Hebrew writers and scholars is unchallenged and earned him the title of "Israel's national poet."  He was truly a wordsmith, taking ancient Hebrew words and devising new constructs to produce new Hebrew words for modern objects such as jetplane, import, export, camera, etc.  ﻿
﻿﻿﻿ Eliezer Ben-Yehuda is called the "father of modern Hebrew."  Bialik was at least its uncle, a man who lovingly played with the language and produced poems, books, word games and even children's rhymes.
But today many are surprised to learn that most of Bialik's life was spent in Europe.  He was born in the Ukraine, attended the famous Volozhin yeshiva in Lithuania, and worked and taught in Warsaw, Berlin and Odessa before moving to Israel in 1924.  Bialik's Hebrew scholarship and writing were already appreciated throughout Jewish Palestine, and in 1927 he was chosen as the head of the Hebrew Writers Union.

Bialik died in Austria in 1934 during a medical procedure.  His funeral took place in Tel Aviv, and among the masses of mourners were the Christian photographers of the American Colony.
Posted by Our Mission at 10:30 PM