A 1913 Film of Eretz Yisrael. If a Picture is Worth a Thousand Words, a Film Is Worth a Million

The 11th Zionist Congress met in Vienna in August 1913.  Four months earlier, in April, a film crew left Odessa by ship to prepare a film on the Life of the Jews of Palestine that would be shown at the Congress.  The producer,  Noah Sokolovsky, spent two months filming the cities, holy sites, and agricultural communities of Eretz Yisrael.

The film was presented and then lost.  ﻿

In 1997, the original negative was found in France.  The 80-minute film was restored and edited by Yaacov Gross.  In 2000 the film was shown at several Jewish film festivals and was even reviewed in The New York Times.

Segments of the film were posted on YouTube 2009.  In April 2012 Arik Rubin posted this one-hour YouTube clip.  The film is narrated by Israeli entertainer Yehoram Gaon, and whether viewed in segments or in one continuous clip, it should not be missed.  The Online Hebrew clip has no English subtitles.

Travelogue and PR for the Zionist Congress

Sokolovsky's ship sailed from Odessa in April 1913 with 92 Jews destined for Eretz Yisrael.  Some went for educational purposes, others went for health reasons, for employment, or to visit family during Passover. Two families consisting of 19 people made aliya, moved to the Holy Land.

The trip would take 11 days, stopping in Constantinople, Alexandria, and finally Jaffa.

The residents of the Yishuv poured out into the streets wherever the film crew showed up.  School holidays were declared, and the film showed hundreds of students from Tel Aviv's Gymnasia school and a Jaffa teachers school.

[Four years later, the Jews of Tel Aviv - Jaffa were expelled by the Turks, and many perished.]

In Petach Tikva, the "mother of the settlements," the clip showed the well-established orange industry, including camel caravans taking the crates of oranges to Jaffa port for export.

Sokolovksy and his crew filmed in Zichron Yaakov on the Sabbath and showed the residents leaving the synagogue after services. Zichron, the "Paris of Eretz Yisrael" and its wine industry were supported by Baron Rothschild. The vineyards of Zichron and Rishon Lezion that he sponsored are on the films.

The clip shows the building of the Technion in Haifa, expressing pride that 100 of the 130 construction workers were Jewish.  Other locations visited included Hadera, Kinneret, Rosh Pinna, Jericho, Rishon Lezion, Nes Ziona, and Gedera.

A segment on Tiberias shows the town's two yeshivot, servicing the 2,000 Sephardi and 2000 Ashkenazi Hasidic Jews. 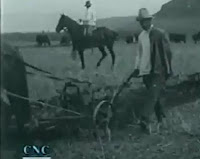 An incredible segment of the agricultural work in Migdal shows a one-armed man plowing behind a horse (picture on the left).  The man was Yosef Trumpledor, a veteran of the Russo-Japanese war who lost his arm in the fighting.  In World War I he formed the Zion Mule Corps and fought in Gallipoli.  In 1920, Trumpledor was killed defending the Tel Hai community in the Galilee. 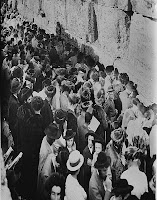 The Odessa film-makers took the train to Jerusalem, filming along the way.  In Jerusalem, they showed the throngs of Jews at the Western Wall on Passover and visiting the grave of Shimon HaTzaddik.  Hundreds of school children marched for the camera, and the narrator added that 120 Jewish children had been saved from missionary schools.

The photographers stopped on the way to Hebron to film Jews at Rachel's Tomb and then filmed the Grave of the Patriarchs in Hebron -- only from the outside.  The Muslims would not permit Jews to enter the shrine, and pious Jews could be seen praying next to an external wall.  1200 Jews lived in Hebron.

The last segment shows a festival held in Rehovot that attracted 6,000 Jews from around Palestine.  A chartered train brought hundreds from Tel Aviv to Ramle and they continued to Rehovot by wagon, horse or on foot -- a 3-4 hour hike.  In a precursor to today's "Maccabiah" athletic games, an athletic presentation was given by sportsmen from around  Eretz Yisrael.  The "festival of Hebrew youth" also attracted 40 Jewish athletes from Germany.

The film shows that Jewish life in Palestine in 1913 was vibrant and productive -- 35 years before the founding of Israel.  Within a few short years, however, the winds of World War I would sweep across Palestine, plunging the Jews of the Yishuv into a period of starvation, pestilence, exile and hardship.
Posted by Our Mission at 8:01 AM