The 'Kotel' Exposed with the Advent of Photography,
Old/New Photos of the Kotel Now Online in Great Detail --
With Thanks to the Library of Congress Archives

A version of this article appears in the Jerusalem Post Magazine today.

The advent of ocean-going steamships and tourism to the Holy Land and the development of photography all went hand-in-hand in the latter half of the 19th century. Tourism encouraged photography and photographs encouraged tourists, explained photography curator Kathleen Stewart Howe, author of The Photographic Exploration of Palestine. 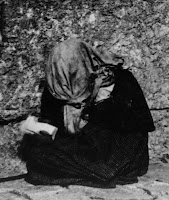 While the first people to look at Palestine through a lens were amateur photographers and missionaries in the 1840s, by the 1860s professional photographers began to visit holy sites and even establish photo studios. Military explorers and surveyors often used the services of the photographers.﻿
﻿
Among the tourists were Mark Twain and his “Innocents Abroad” companions in 1867. His party stayed at the same Old City Mediterranean Hotel as a British survey team headed by Lt. Charles Warren.

The American Colony settlers who arrived in 1881 eventually established a tourist store inside the Jaffa Gate in the Old City where they sold their photographs. They capitalized on the fierce demand for pictures of the German emperor’s visit to Jerusalem in 1898.
﻿
﻿

The Library of Congress archives contain not only the 22,000 photographs of Palestine by the American Colony photographers, but also pictures dating back to the 1860s by pioneering photographers Felix Bonfils, Peter Bergheim, Frank Good and others. The American Colony pictures were donated to the Library of Congress and classified as “public domain.”  Photographs of the Western Wall by the other photographers, some more than 130-year-old, were available to researchers within the Library, but never “made public” Online.

These photographs are presented here and are now available to the public Online. The old glass plate photographic technique, rather than paper and film, provides viewers with an amazing enlargement capability.


﻿ ﻿
Click on pictures to enlarge.
Click on captions to view the Library of Congress originals with the option to use "Tiff" enlargement.
﻿
﻿In viewing these 145-year-old pictures, bear in mind that these are not the spontaneous snapshots of today. The pictures required long exposures and extensive set-up, Stewart Howe explained. Often the subjects were models dressed to play the role.

That was apparently the case of the seven “Ashkenazi Jews” photographed at the Mediterranean Hotel in the Old City in 1867 by a member of Lt. Charles Warren’s expedition team.


This collection of 19th century photographs presents a portrait of Jerusalem's Jewish community, a pious population who gathered at the retaining wall of Judaism's most sacred site. According to the 1871 visitor to Jerusalem William Seward, the American Secretary of State under Abraham Lincoln, the Jews comprised half of the city's population, the Muslims one-quarter, and the Christians and Armenians the remainder.
Posted by Our Mission at 8:15 AM