One 80-Year-Old Picture of Jerusalem's Old City
Is Worth 1,000 Words of of History

This picture from the Library of Congress -- American Colony Photographic Department collection was taken from the newly constructed YMCA tower in Jerusalem in 1933. The photographer was looking east toward the Old City and the Mount of Olives beyond. 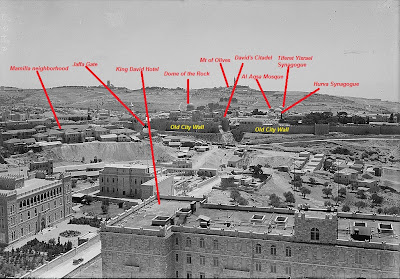 The photo also shows four domes in close proximity to the Temple Mount -- the Dome of the Rock and then three domes in a row to the right, the Hurva Synagogue, followed by the Tiferet Yisrael Synagogue, and then the Al Aqsa Mosque.

Prominent in the foreground is the King David Hotel. In the background are the Mount of Olives and Mount Scopus.

The two large synagogues were blown up in 1948 after the Old City and Jewish Quarter fell to the Jordanian Legion.

The two synagogues were prominently featured in the other pictures taken around 1900.﻿
﻿
In 1949, the city of Jerusalem was riven by an armistice lines with barbed wires, walls, and border crossings.  It remained split until 1967 when the city was reunited in the "Six-Day War."


The same view today
The Hurva was rebuilt in 2010.  Plans to rebuild the Tiferet Yisrael Synagogue were announced by the Jerusalem Municipality in November 2012.

Subscribe online by visiting www.israeldailypicture.com and enter your email in the box in the right sidebar.