In Memory of Robert F. Kennedy on the 45th Anniversary of his Assassination 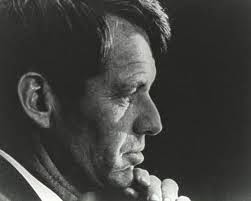 
We leave our regular historical features to pay tribute to Robert Kennedy who was murdered on this day in 1968.

1. Kennedy visited the Holy Land prior to Israel's establishment as a young newspaper correspondent and described Israel's armed struggle and economic development.

2. Several historic photographs of Kennedy's 1948 visit to Palestine were provided by the Kennedy family.

3. Kennedy, as a young college graduate, wrote several feature articles for The Boston Post on his visit.  The newspaper went out of business in 1956 and for many years the articles were virtually lost.

Several years ago, The Israel Daily Picture's
publisher, Lenny Ben-David, found the articles, published them, and posted them on the "Robert Kennedy and Israel" website.

4. Kennedy's family points out that he was murdered by a Palestinian Arab terrorist, Sirhan Sirhan, who was angry about Kennedy's strong support for Israel.  The assassination took place on the first anniversary of Israel's victory in the Six Day War, and the timing was no accident, the family insists.

5. Kennedy visited the Middle East in March 1948 and departed Palestine before Israel's declaration of independence on May 14 and Ben-Gurion’s announcement of the name of the new country. RFK, therefore, does not refer to “Israel” or to “Israelis” in his articles.

The Jews point with pride to the fact that over 500,000 Arabs in the 12 years between 1932 and 1944, came into Palestine to take advantage of living conditions existing in no other Arab state. This is the only country in the Near and Middle East where an Arab middle class is in existence.

It is an unfortunate fact that because there are such well founded arguments on either side each grows more and more bitter toward the other. Confidence in their right increases in proportion to the hatred and mistrust for the other side for not acknowledging it.

The Jewish people in Palestine who believe in and have been working toward this national state have become an immensely proud and determined people. It is already a truly great modern example of the birth of a nation with the primary ingredients of dignity and self-respect.

Read the full-length articles by RFK here.
Posted by Our Mission at 12:38 AM