E-zine #1 of the "Jews of Palestine" series

Editor's note: Israel Daily Picture now contains more than one thousand pictures and 350 photo essays on the Holy Land.  We will continue to add more vintage photographs as more and more historic pictures are digitalized in the libraries and archives around the world.

We present today an "E-zine" experiment, an electronic magazine "Jews of Palestine" in which we group the publication around specific topics.

Today's topic focuses on America's role in the life of the Jews of Palestine.  Future E-zines will focus on World War I in Palestine, the synagogues of Jerusalem, Yemenite immigrants of the 19th century, the Gates of Jerusalem, Jewish holidays and festivals, Jewish industry, the building of the Jewish state, and more.  The series will show the Jewish life in Eretz Yisrael years before Theodore Herzl's Zionist manifesto and well before the founding of the State of Israel.

Here is our first edition.  Please let us know your opinion in the comment section below.

Photographic History of American Involvement in the Holy Land 1850-1948 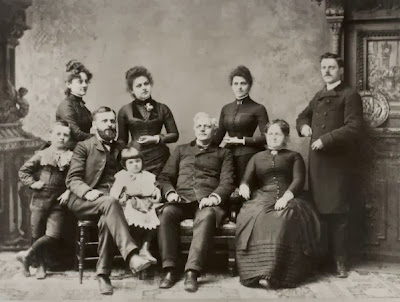 In 1988, John Barnier visited a garage sale in St. Paul, Minnesota.  There he found and purchased eight boxes of old photographic glass plates.  Fortunately, Barnier is an expert in the history of photographic printing.

He had little idea that he had uncovered a historic treasure. Later, he viewed the plates and saw that they included old pictures of Jerusalem.  He contacted the Harvard Semitic Museum in Cambridge, Massachusetts, known for its large collection of old photographs from the Middle East.

On some of the plates they found the initials MJD. Until then the name Mendel Diness was barely known by scholars.  It was assumed that with the exception of one or two photos his collection was lost. Click to see more 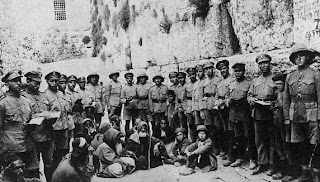 The history of the Jewish Legion that fought in Palestine in World War I is relatively unknown.

Many of the soldiers were recruited from the ranks of the disbanded Zion Mule Corps, Palestinian Jews exiled by the Turks in April 1917 who were recruited in Egypt, or from Diaspora Jewry recruited in Canada and the United States.

As many as 500 Jewish Legion soldiers came from North America; many of them were originally from Poland or Russia. One Legionnaire was Pvt. Click to see more 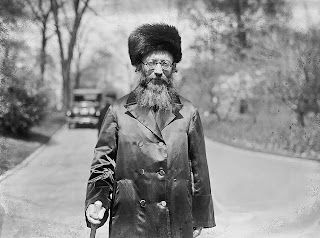 Who knew Calvin Coolidge met the Chief Rabbi of Palestine in the White House?

Rabbi Abraham Isaac Kook (1865-1935) was a renowned Talmud scholar, Kabbalist and philosopher.  He is considered today as the spiritual father of religious Zionism, breaking away from his ultra-Orthodox colleagues who were often opposed to the largely secular Zionist movement. Born in what is today Latvia, Rabbi Kook moved to Palestine in 1904 to take the post of the Chief Rabbi of  Click to read more


Mark Twain in the Holy Land, 1867, and the Innocents Abroad 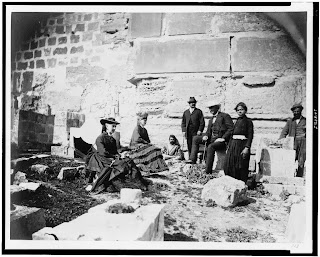 Are these Photographs of Mark Twain's Companions from The Innocents Abroad?
"The Pilgrims and the Sinners" in the Holy Land

Mark Twain was a relatively unknown writer in 1867 when he visited Palestine in the company of 64 "pilgrims and sinners" and wrote these words:

Palestine sits in sackcloth and ashes. Over it broods the spell of a curse that has withered its fields and fettered its energies.... Click to read more 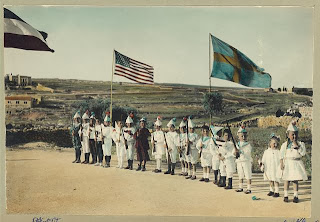 The founders of the American Colony in Jerusalem in  1881 were proud of their American roots. The group of utopian, millennialist Christians were later joined by Swedish-American and Swedish believers.

The American Colony set up clinics, orphanages, cottage industries and soup kitchens for the poor of Jerusalem, earning favor with the Turkish rulers of Palestine. Click to read more 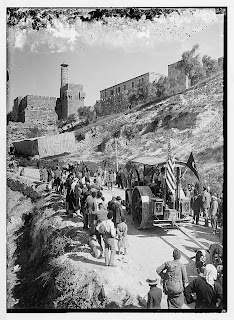 Why was an American flag flying on a Jerusalem steamroller 100 years ago?

The Library of Congress archives includes  two photographs of a steam roller on the streets of Jerusalem.
No explanation was given for the American flag; nor was a definitive date provided. Click to read more

U.S. Aid to the Jews of "Palestine" Was Essential 100 Years Ago


Congressional Visits to Israel Are Not New. Pictures of a Senate Delegation in 1936, a Critical Year 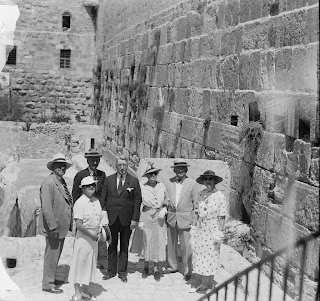 April 1936 was the start of a vicious anti-Semitic and violent "Arab Revolt" in Palestine that would last through 1939.

The murderous attacks against Jews, Jewish communities and Jewish property were widespread throughout Palestine.  British government offices, banks and railroads were also attacked.

Coming so soon after the 1929 massacres of Jews in Palestine and under the looming shadow of the Nazi threat, the attacks against Palestine's Jews alarmed friends of the Zionist Click to read more


What Lincoln Would Have Seen in Jerusalem Abraham Lincoln "said he wanted to visit the Holy Land and see those places hallowed by the footprints of the Saviour. He was saying there was no city he so much desired to see as Jerusalem," Mary Todd Lincoln told the Springfield, Ill. pastor who presided at Abraham Lincoln's funeral.  She explained that the 16th president told her of his desire before he was fatally shot in Ford's Theater on April 14, 1865.

Truth or Mary Todd Lincoln's imagination?  We can only Click to read more