Passover Nears.
Time to Recall that a Biblical-Scale Plague Struck the Holy Land 99 Years Ago

A version of this posting appeared in January 2012.

World War I brought widespread devastation to the Middle East as German and Turkish armies fought British, Australian and New Zealand troops in battlefields from the Suez Canal in the south to Damascus in the north.

The war also meant a cut-off of aid and relief to the Jews of Palestine from Jewish philanthropists in Europe and the United States. 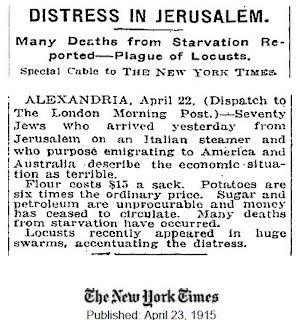 As many as 10,000 Jews were expelled from Jaffa-Tel Aviv in April 1917 by the Turks, and many perished from disease and hunger.

But the famine that struck the residents of Palestine was also caused by a massive plague of locusts that swarmed into Eretz Yisrael in March 1915 and lasted until October.  Accounts of the locusts and the subsequent starvation and pestilence recalled the plagues of Bible.

A New York Times account from April 1915 described deaths from starvation.  By November 1915, the Times detailed a cable from the American Counsel General in Jerusalem in which he described "fields covered by the locusts as far as the eye could reach."  The diplomat reported on efforts made by the Turkish leader of Palestine to combat the locusts.  A Jewish agronomist, "Dr. Aaron Aaronsohn, who is well known to the Department of Agriculture at Washington, was appointed High Commissioner" to the "Central Commission to Fight the Locusts." ﻿
﻿﻿﻿﻿

[Aaronsohn would go on to establish the anti-Turkish NILI spy ring in 1917.  His sister Sarah was captured by the Turks for her involvement in the spy ring, and after torture, she committed suicide.]

American funds and food were essential for keeping the Jewish community in Palestine alive, and aid was delivered by U.S. Navy vessels.
﻿
The American Colony in Jerusalem established soup kitchens to feed starving residents in Jerusalem.  The colony's photographers documented more than 200 pictures of the locusts' devastation, efforts to combat them and the locusts' life cycle.  An album of color (hand tinted) photographs is stored in the Library of Congress collection.
﻿
﻿
The Times reported, "Few crops or orchards escaped devastation.  This was especially true on the Plain of Sharon, where the Jewish and German colonies, with their beautiful orange gardens, vineyards, and orchards, suffered most severely... In the lowlands there was a complete destruction of crops such as garden vegetables, melons, apricots and grapes ... upon whose supply the Jerusalem markets depend... few vegetables or fruits [were] to be had in the markets."


"In Jerusalem and Hebron," the report continued, "the heaviest loss from the onslaught of the locusts has been in connection with the olive groves and vineyards.  Olive oil is a staple of food among the peasants and poorer classes....The grape, too, is a similar staple among all classes."﻿
﻿﻿﻿﻿


"When the larvae appeared near Jerusalem," the Times related, residents were mobilized "for immediate organized resistance....Tin-lined boxes were sunk in the earth in the direction in which the locusts were advancing." Men, women and children were given flags and "the flaggers would drive the locusts together in a dense column toward the trap..."

Both the forces of war and nature combined to take a terrible toll on the residents of Palestine during World War I.

Join 3,800 subscribers and receive Israel Daily Picture via email
Posted by Our Mission at 9:42 AM