World War I in the Holy Land. Kiwi Soldiers Describe their Encounter with Jews

Commemorating the centenary of World War I, we present the picture history of the battles in the Holy Land, with the soldiers from Turkey, Austria and German on one side and the British army with its contingents from Australia, New Zealand, and India on the other.  We will also post pictures showing the Jewish soldiers and volunteers from Great Britain, Australia, the United States, Canada, New Zealand and Palestine itself. The Jewish soldiers also provided incredible pictures of the Jewish communities they found in Palestine.


In January 1915, the German-led Turkish army attacked British forces along the Suez Canal.  The British blunted the assault and took the hard-fought war into the Sinai Peninsula.

By March and April 1917, the British army attempted to push through Gaza and up the Mediterranean coast in battles that involved as many as 60,000 soldiers, British and French ships firing on Gaza from the Mediterranean, the use of poison gas, and the deployment of newly developed British tanks. The British suffered a disastrous defeat.

In a risky maneuver in October 1917, the British army flanked the Turkish army in Gaza by moving through the desert toward Be'er Sheva.  The garrison and the crucial wells of Be'er Sheva were captured in a daring cavalry charge of Australian Light Horsemen described here.

The British pushed on toward Jerusalem, and the New Zealand troops were sent westward toward Jaffa.  See photo album by Jewish soldier Charles Broomfield here.

The following are excerpts from  THE STORY OF TWO CAMPAIGNS: OFFICIAL WAR HISTORY OF THE AUCKLAND MOUNTED RIFLES REGIMENT, 1914-1919, a collection of battle reports and diaries.


The following morning [November 15, 1917] the village of Ayun Kara [near Rishon Lezion] was reported clear of the enemy, and, with a company of "Camels" on

the left and the 1st Light Horse on the right, the brigade moved forward towards Jaffa, meeting with no resistance. On the way they passed through the village of Richon le Zion, where for the first time they met Jews. One member of the community was a brother of Rabbi Goldstein, of Auckland. The joy of these people at being freed from the tyranny of the Turks was unbounded. They treated the New Zealanders most hospitably—an exceedingly pleasant experience after the tremendous effort they had just made, and the harsh hungry times spent in the south with its hostile Bedouins.

Jaffa was occupied without opposition, the Turks falling back to the line of the river Auja, a few miles further north. While this fighting had been taking place, great success had been achieved to the south. Ramleh, on the Jaffa-Jerusalem railway, was taken; and the enemy, whose receding line extended in a south-east direction from Jaffa, had reason to feel anxiety for Jerusalem itself. 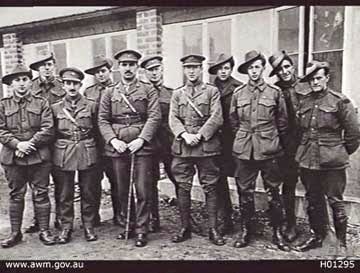 In normal times Jaffa had a population of 60,000 people, including 30,000 Moslems, 10,000 Jews, and 10,000 Christians, but during the war its population had gone down considerably, and it had lost its prosperity, partly through there being no fuel for the engines which had been used to pump the water from the wells to irrigate the orchards. Within a few days of the British occupation, Jews and Christians, who had been expelled by the Turks, started to return, bringing their goods and chattels in all sorts of conveyances.

During the night the 53rd Division pushed up the Hebron road and occupied Bethlehem.


General Allenby's report goes on to say—"Towards dusk the British troops were reported to have passed Lifta, and to be within sight of the city. On this news being received, a sudden panic fell on the Turks west and south-west of the town, and at 5 o'clock civilians were surprised to see a Turkish transport column galloping furiously cityward along the Jaffa road. In passing they alarmed all units within sight or hearing, and the wearied infantry arose and fled, bootless and without rifles, never pausing to think or to fight.

"After four centuries of conquest the Turk was ridding the land of his presence in the bitterness of defeat, and a great enthusiasm arose among the Jews. There was a running to and fro; daughters called to their fathers and brothers PAGE 168concealed in outhouses, cellars and attics, from the police who sought them for arrest and deportation. 'The Turks are running,' they called; 'the day of deliverance is come.' The nightmare was fast passing away, but the Turk still lingered. In the evening he fired his guns continuously.

"At 2 o'clock in the morning of Sunday, December 9th, tired Turks began to troop through the Jaffa gate from the west and south-west, and anxious watchers, peering out through the windows to learn the meaning of the tramping were cheered by the sullen remark of an officer, 'Gitmaya mejburuz' (We've got to go), and from 2 to 7 that morning the Turks streamed through and out of the city, which echoed for the last time their shuffling tramp.

On this same day, 2082 years before, another race of conquerors, equally detested, were looking their last on the city which they could not hold, and inasmuch as the liberation of Jerusalem in 1917 will probably ameliorate the lot of the Jews more than that of any other community in Palestine, it was fitting that the flight of the Turks should have coincided with the national festival of the Hanukah, which commemorates the recapture of the Temple from the heathen Seleucivs by Judas Maccabæus in 165 B.C."

On December 11th the Commander-in-Chief, followed by representatives of the Allies, made his formal entry into Jerusalem. The historic Jaffa gate was opened after years of disuse for the purpose, and he was thus enabled to pass into the Holy City without making use of the gap in the wall made for the Emperor William in 1898. The General entered the city on foot—and left it on foot.