The Ottoman Imperial Archives continues to digitize and post Online its massive collection of documents, photos and illustrations.

Resposible archivists and librarians around the world realize the importance of digitizing its treasures and sharing them with the world.


We will continue to present and analyze the photographs from this archive as we review and identify them, but we wanted to immediatey share this historic photograph of Jerusalem's Old City taken from the Mount of Olives. 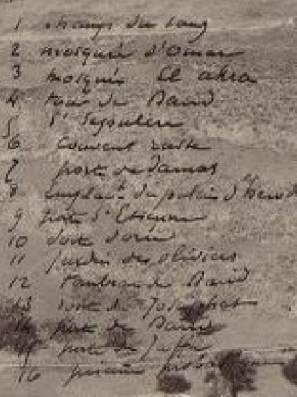 We surmise that the photographer or owner of the photo was French from the notes made on the image to identify 16 sites numbered on the photograph.  It is difficult to read the notes, but number 3, "Mosque d'Omar," and number 12, "Tombeau de David [David's Tomb]," are legible  and in French.

But when was the photograph taken?

The answer is provided by one of the landmarks not contained on the tourist list -- the Tiferet Yisrael Synagogue near the Hurva Synagogue in the Jewish Quarter.


﻿
﻿﻿
﻿﻿﻿﻿﻿The Hurva, built in 1864, is the building on the left with the dome.  Short of funds, Tiferet Yisrael didn't complete its dome until Emperor Franz Josef of Austria visited the site in 1869 and supposedly asked why it had no roof. "Why, the synagogue took off its hat in honor of Your Majesty," he was told.  He contributed money for the project, and the synagogue was dedicated in 1872.

The photo of the topless synagogue, therefore, was taken prior to 1872, more than 140 years ago.

Both synagogues were blown up by the Jordanian Legion during the 1948 war.  The Hurva was recently rebuilt, and there are plans to rebuild the Tiferet Yisrael Synagogue, too.
Posted by Our Mission at 9:39 PM