Correction to Our Posting about Max Rossvally and "Blowing Smoke" 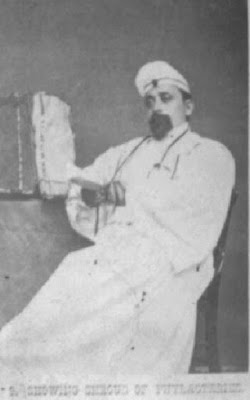 Max Rossvally was a Jew who converted to Christianity, a fraud and ex-con. However, one of the sources we cited was actually a satire written 120 years ago.
Reader "Sarah" informs us that the section below is a satire, using real names of known individuals of the time. Apparently the report on the meeting is a lampoon. She quoted from the editor's introduction:
"Litigation apparently did not recornmad [SIC] itself to Harry Hananel Marks (z8yy-z916), editor in 1878-1879 of New York City's Reformer and Jewish Times. Marks... preferred the "means" of satire and produced the lampoon reprinted below. .... His pamphlet is, in any case, a clever - and even a prophetic -piece of work. .... Marks cleverly juxtaposed these savory characters with some of the leading and most accomplished Jews in the world at that time.... "

and from https://en.wikipedia.org/wiki/Harry_Marks
"He also published the sharp satire Down with the Jews! Meeting of the Society for Suppressing the Jewish Race (1879), which attacked anti-semitism among American politicians"