Why Is There an American Flag on this "Vehicle?"

﻿Call it a palanquin, litter or sedan.

But we still have no idea why an American flag waves from the top of this mule-carried contraption used in Lebanon or Palestine around the 1870s.

The passenger appears to be a woman. 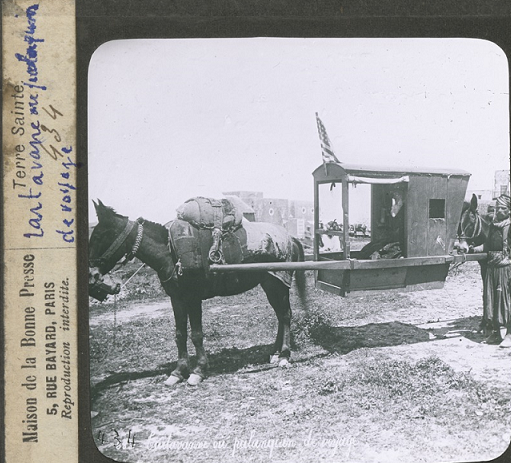 We discovered this photo in a collection now online in the British Library's Endangered Archives Program.  Perhaps it shows a litter used by an American diplomat or his family. We estimate it was taken in the 1870s in Beirut, Jerusalem or Jaffa.

The picture is part of the Fouad Debbas private collection in Beirut. The collection of 3,000 photographs contains photographs from the Maison Bonfils studios of Paris and Beirut (1867-1910s). The British Library undertook to "clean, list, index, catalogue and digitize" a collection that was endangered.

We thank the staff of the British Library for their efforts and for opening the collection to the public.