The U.S. Navy Saved the Jews of the Holy Land 100 Years Ago

We have written previously how the United States Government rallied to save the Jews of the Holy Land from famine and expulsion by the Turkish army during World War I.  But we are now adding an important historic document from that episode showing the vital involvement of American Jewry and the United States Navy exactly 100 years ago.

At the start of the war, Jewish men were forcibly conscripted into the Turkish Army, a devastating locust plague ravaged the land in 1915, Turkish troops were looting supplies in preparation for their attack on the Suez Canal, charitable funds from European Jewish communities for the Jews of Palestine were cut off, and plans were being drawn up by the Turks to expel the Jews from the land.  The United States Ambassador to Turkey, Henry Morgenthau, warned American Jewish leaders of the danger to the Jews of the Holy Land and appealed to them for funds. 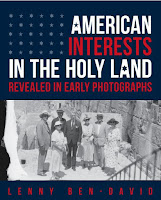 The American government had not yet enterred the war and U.S. aid could still get through. But to ensure that the money and supplies would not be stolen by rapacious Turkish officials, the U.S. secretary of state approved the use of American warships for the deliveries. Thirteen U.S. ships were used for the deliveries and for providing passage to Jews expelled from the land by the Turks.

More information and photographs on this historic episode will appear in the forthcoming book, American Interests in the Holy Land, Revealed in Early Photographs by Lenny Ben-David.
Posted by Our Mission at 11:28 AM