Tales of Disguise, Mirth and the Threat of Haman

This week Jews around the world celebrate the joyous holiday of Purim. The Purim holiday commemorates the victory of Queen Esther and Mordechai over the evil Haman of Persia, saving the lives of the Jewish people.

Below are several Purim-related pictures we discovered in the archives of the Library of Congress. 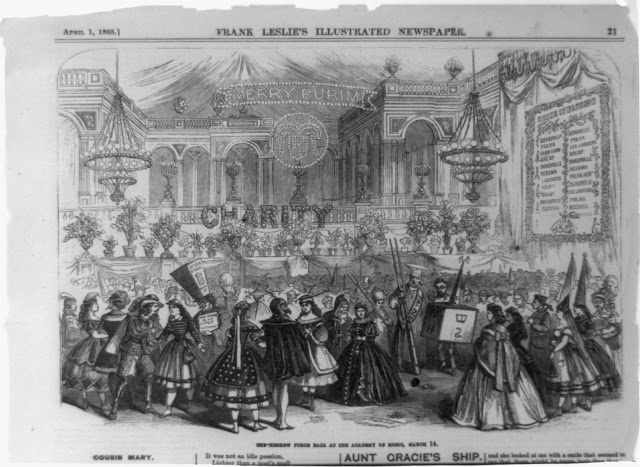 This picture appeared in an American newspaper on April 1, 1865.  The wood engraving is captioned, "The Hebrew Purim Ball at the Academy of Music, March 14."  The picture contains a large sign, "Merry Purim," another sign listing the "Order of Dancing," and merrymakers wearing costumes and masks.

The picture was published in Frank Leslie's illustrated newspaper, printed in New York, NY. The Academy of Music was built in 1854 and was located in Manhattan at Irving Place and East 14th Street.
And in Tel Aviv --

The Jews of Palestine used to celebrate heartily at the Purim Adloyada ["until they don't know"] festival and parade held in Tel Aviv in the 1920s and 30's.  Some commentators make a crude
comparison to Marde Gras partying, but the merriment is based on an ancient rabbinic tradition of Jews imbibing on Purim to the point where they do not know the difference between sobriety and drunkenness, between Mordechai and Haman -- but without losing their wits.

But the threats to the Jewish people were also apparent to the photographers of the American Colony who photographed Purim celebrations in Tel Aviv in the early 1930s. They photographed parade floats showing the Nazi threats.

View Yaakov Gross' film of the Tel Aviv celebrations in the 1930s here and visit his wonderful collection of films here.
Posted by Our Mission at 7:31 AM