Jordan River Water Was Shipped to the U.S. in 1906 and May Have Flushed an Anti-Semitic U.S. Diplomat Out of His Job 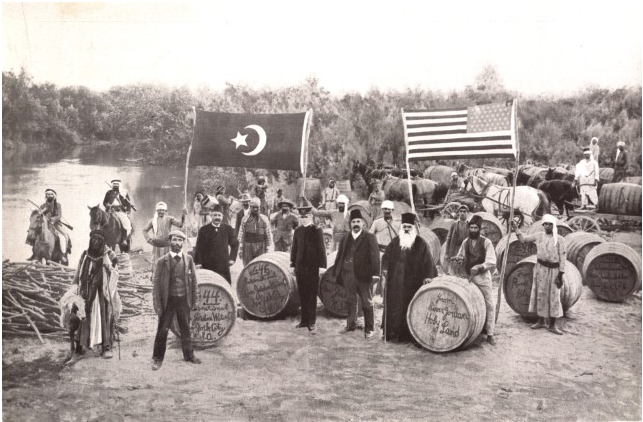 The International River Jordan Water Company was launched by Col. Clifford E. Naudaud of Covington, Kentucky, in 1906.  He secured "the sole right of shipping the water of the Jordan River from the banks of the stream in Palestine to all parts of the world for baptismal and other purposes," according to a Kentucky newspaper, The Bee, published in Earlington, KY.

The water was "shipped in casks bearing the seals of the Turkish Government and the American Consul," according to The Bee. "The water will be bottled in the United States in bonded warehouses."

The American Consul granting his seal for the commercial venture may have cost the veteran diplomat his job. His departure was a blessing for the Jews of Palestine. The Consul-General was undoubtedly the nastiest anti-Semite to ever hold that post.

Details on the U.S. diplomat and his legacy in the American foreign service are discussed in the forthcoming book, American Interests in the Holy Land Revealed in Early Photographs.  Order it here now.
Posted by Our Mission at 11:06 PM