The Enigmatic Photograph from the Library of Congress:
Lag B'Omer & Jewish Children’s Parade exactly 100 years Ago

Among the thousands of very old and recently digitalized pictures from a Library of Congress collection of photos from Palestine, there is this captivating picture.
All the original Library of Congress caption explained was that the picture was taken between 1910 and 1930 and that it is  a “Group of children and adults in procession in street, some holding a banner with a Star of David.” 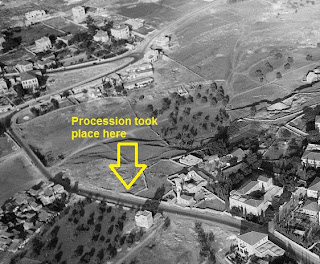 Who are the hundreds of children?  Why are the boys and girls separated?  Where are they marching to? Where is this picture taken? And why is there a tent compound on the left horizon?

Photo analysis and comparison to an aerial photograph from 1931 and contemporary pictures indicate that the children are walking south on the Nablus Road (Derech Shchem) in the direction of the Damascus Gate of the Old City of Jerusalem. Behind them is the road that veers to the right toward Mt. Scopus.  The road leads to a neighborhood built around the grave of a High Priest named Shimon the Righteous  (Hatzadik) who lived in the days of the Second Temple.

The boys and girls come from ultra-Orthodox schools, evidenced by the boys’ hats and frocks. The girls are wearing ultra-Orthodox fashion: shapeless, modest smocks. But wait, the second batch of girls, those behind the Star of David banner (might they be from a “Zionist” school?) are wearing more stylish dresses and hats.
The tents belong to a British army camp after they defeated the Turks in 1917 and were deployed along the northern ridges stretching from Nebi Samuel to the Mount of Olives. The compound appears similar to other British army compounds in Library of Congress photographs.
The day started off cool, and the girls have shed their sweaters.  It’s a warm Spring day, and from the shadows it’s probably around 2 PM.

In fact, the day was Tuesday, April 30, 1918.  The procession is almost certainly an organized outing of several Jerusalem schools taking place on Lag Ba’Omer, four weeks after Passover.  Traditionally, on Lag Ba’Omer Jews flock to the Galilee mountaintop of Meiron to the grave of Shimon Bar Yochai, one of the most famous scholars in the Talmud.  But some 100 years ago, travel to Meiron would have taken days.  Instead, the children took a hike to Shimon Hatzadik’s grave, a known custom 100 years ago in Jerusalem.

The picture was taken just four months after the British forces captured the city of Jerusalem. The city's Jewish residents received the soldiers as their saviors -- saving them from severe hunger and deadly diseases. The children had much to celebrate.

Today, Lag Ba’Omer is a day when Jewish children still go out to parks and forests to celebrate.  In Jerusalem, many traditional Jews still visit Shimon’s grave.


The houses around the tomb where Jews lived 100 years ago were abandoned under threat of Arab pogroms in the 1920s and 1930s.  The Hadassah convoy massacre in 1948, in which almost 80 Jews were killed, took place on the road beneath the building with the very prominent arches.
In recent years, however, Jewish families have returned to the Shimon Hatzadik neighborhood.
Posted by Our Mission at 8:15 AM